How can something this delicious have so few ingredients, that is what I’d like to know. I took great pleasure in offering them to my family, going “guess what’s in them??” and then informing them that there are in fact only four ingredients. It’s the small things in life.

These oreo ‘fudge’ balls actually aren’t fudge at all, but you wouldn’t know unless you were the one to make them. They are incredibly moist, creamy and chocolatey, with a very mild tang from the cream cheese followed by a light undertone of vanilla.

I used milk chocolate but would have wanted to use dark chocolate instead – unfortunately lack of funds and petrol made the decision for me.

I also painstakingly made my first vine while making the oreo fudge balls, check it out here. The 6 seconds of footage took me hours to make, but I’m so proud of it! Hopefully it won’t take me as long in the future, because that was stress city let me tell you.

Scroll down for the recipe.

Inspired by the original recipe on Snack Works 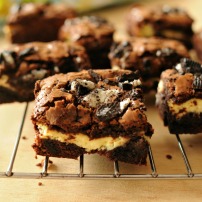 ARE YOU LOVIN’ IT?